Hello all, I hope you’ve had a great week and are ready to begin a new one!  I am super excited as we had the first real snowstorm of the year last night.  It usually snows quite a bit here, and the lack of snow this year has been concerning, especially for the ski resorts.  I plan on making the most of the beautiful snow by taking my dogs for a romp in the park.

I am going to talk a bit about saving money at the grocery store as a vegan and meal prepping to make the most out of it.  People always ask me “Isn’t going vegan SO expensive??”  It definitely could be, and I can understand that mindset.  Some vegan recipes, especially staples, are daunting because they require so many ingredients most people don’t already have in their pantries.  But there are definitely ways to eat vegan on the cheap.

I think one of the best way to affordably vegan meal prep for the week is to make something really basic and build on it depending on what you like, your grocery budget, and the amount of time you can spend meal prepping.  This week my grocery budget was pretty tight and I didn’t have much time, so I decided to make some pasta for all of my lunches.  Pasta is cheap, but I had a digital coupon for some bowtie pasta, making it even cheaper.  I sauteed some spinach and mushrooms I found on clearance and mixed the 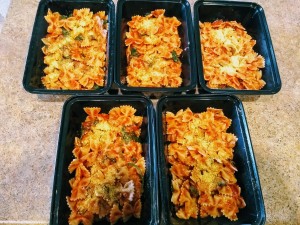 m with a jar of marinara (for which I also had a coupon) and topped with some nutritional yeast.  Making five vegan lunches added up to around $6, which is pretty good.  I know some people get sick of pasta, but I really like all of the variations you can make.

I usually don’t meal prep dinners unless I know it will be a busy week, and this week is going to be hectic in the p.m.  Another cheap vegan option that almost everybody likes is stir-fry.  Frozen stir fry vegetables w/noodles were 10 for $1 at the store, and I sauteed them with some tofu marinated in Siracha and soy sauce and made some rice to go along with.  Making four stir-fry meals cost me around $5 or even less as I have a HUGE bag of Jasmine rice I’ve been using for ages. 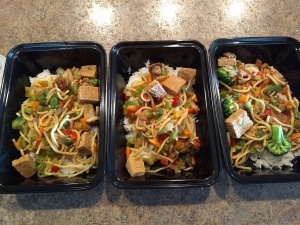 Frozen vegetables are usually on sale or generally really cheap, and I find it’s good to buy a bunch and then store them in the freezer for easy meal prep ingredients.

I think Asian (both east and west) and Mexican/Central American foods really lend themselves to being vegan and affordable.  Beans (especially when you buy them dry) and rice are always cheap as are ingredients for a curry.  You can add or subtract ingredients based on what you have and can afford, and most of them are very nutritional.

When people say going vegan is so expensive, I think they don’t realize most people in the world, especially those living in poverty, eat simple meals without animal products.  Eating a ton of animal protein is such a western thing, and it is definitely ruining our health.  I hope once people figure out how easy it is to go vegan on a strict budget, they will try to make more vegan meals.

If I have more time to meal prep next week, I hope to try some tips on eating vegan and saving money from Sweet Potato Soul!