I am really excited because I’ve been vegan for one month!  Over one month, actually!  I am super proud of myself and have found it easier than I initially thought it’d be mainly due to meal prepping and staying organized with grocery shopping.  It’s actually one of the easiest things I’ve ever done!

That being said, I decided to branch out a bit this weekend and do some vegan baking.  I am an avid baker, and I love making treats for my husband to take to work.  In the past, I’ve perfected macarons, biscotti, pies, tarts, cakes, various cookies, and different types of quick and yeast breads.  One of the reasons I was so worried about going vegan was because I LOVE to bake, and, let’s face it, there are some things that are difficult to veganize, at least in an authentic way.

I decided to first veganize baking I know best and have done the most of–cookies and quick breads.  I planned on making vegan banana muffins this weekend, but I turned the old bananas I was going to use into a smoothie, so I just made some chocolate chip cookies instead.

This cookie recipe is what I used and is SO amazing! I was so pleased with how these cookies turned out, and I really love the subtle coconut flavor.  The extra chocolate chunks added at the end make them a decadent treat.  My husband also enjoyed them, and he is very picky about this whole vegan thing in general.  I hope to make more vegan cookies soon, and I’d love for people to share any solid vegan cookie recipes! 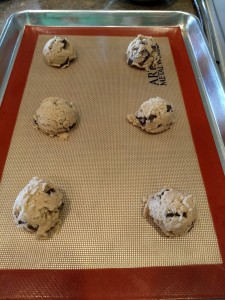 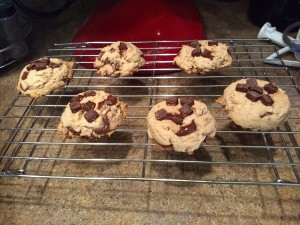 After making some cookies, I did some major meal planning for the week.  I am honestly not really a sandwich for lunch kind of person, but I was craving them this week, so I decided to make Forks Over Knives recipe for a “no-tuna” salad sandwich. (BTW, FOK has been really integral in helping me go vegan–I love their website and cook books!)  I already had most of the ingredients, so it was a breeze.  It is also super delicious and making for some great packed lunches this week! 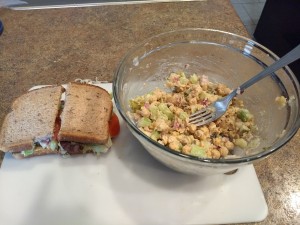 And last but not least, I decided to go back to an old stand by recipe I’ve been making and enjoying for years.  This slow cooker lentil recipe is one of my favorites.  You can substitute Earth Balance for the butter, and it tastes exactly the same.  Although it says it makes four meals, I can get five out of it when serving it with rice as I did here.  It is super filling and delicious even though it only calls for a few ingredients.  I would highly recommend it!

I would like to do my next blog entry on some major changes I’ve seen in my health in just a month since going vegan, so stay tuned!